internet dating on the great divide

@crustbikes (matt) invited me to join him and @larkin80kv (darrin), @markreimer and possibly some other friends @ultraromance and @mr_shredward in Banff for a ~10 day ride on the great divide trail with the intention of making it to Missoula Montana for the 40th anniversary celebration of the Adventure Cycling Association. It seemed like the perfect real world test for sample ScapeGoat I had just built-up, not to mention lots of fun. Naturally l waited till the week before to commit — and flew to canada without the faintest idea what the ACA celebration would entail, nor any idea who else would be on the trip. 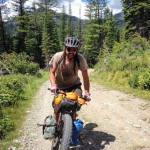 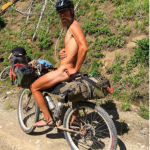 
The Adventure Cycling Association started in 1976, promoting the bikecentenial, a bike ride from coast to coast — the success of which led the association to incorporate and create the transamerica route. The first of many extremely well mapped cycle-touring routes. While most of their routes are paved, the ACA are also responsible for the Great Divide trail — which inspired Riding the Spine, and as such, had a huge influence on the trajectory of my life. So it seemed rather fitting to ride a portion of the trail which had helped shape my reality, to a party celebrating the folks who made it. Not to mention that this would be a much better season to mtn bike in the rocky mountains — I had only previously experienced the trail in winter.

It was only when we arrived in the little tourist town of Banff BC that l realized how many people were on this ride. And how few of them had met in person before. Turns out l was on an internet date with 20 + other folks. A social media experiment of sorts — or a testament to the power/possibility of social media. Bikepacking, brought to you by instagram.

Being a latecomer to the party, and a fledgling instragram user — I’m not entirely sure who organised/how this thing came to be — l know @spencerjharding and @ultraromance were involved. Whatever the genesis, it came to be, that one evening in july a surprising number of really cool folks converged on the YWCA hostel lawn in Bannif; recognizing each other by their bikes, as seen on the internet. And there were several rounds of slightly awkward introductions, where instagram handles got exchanged for given names.

It was an unwieldy conglomeration, different agendas, time frames, levels of preparation, etc. So after several hours of drinking and general bike nerding in the drizzle in front of the hostel, the group split up — most of the crew heading out to camp a short way up the trail, and the rest waiting on late arrivals/ sorting out gear, got started some time the next day. I was in the later smaller group, and after canvassing the hardware stores and bike shops of Banff and some last minute international banking (Crust bikes had bills to pay) we got our tires dirty. 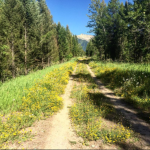 I was experimenting with single-speed touring; dingle-speed really as l had two gears (actually four counting the two cogs on my ‘front’ wheel, which l never used) which are changed manually (with a wrench). One gear for flat land/hard pack, and one for steep hills/mtn biking was the theory. A theory which l didn’t really get to test, because the crankset l chose, didn’t really fit the bike, and failed twice in the first couple hours. By the third time it broke it was clear that no amount of roadside repair was going to get the cranks to even last the day — let alone the tour. Fortunately there was a relatively nearby town with a couple of bike shops.

We rode a few miles straight down hill and arrived at Canmore just after both bike shops in town closed. @footfotografie (Paul) from @outsidebikeandski (awesome dude and great shop), let me in for what turned out to be a long time — after hours — to use the shop tools. And hooked me up with a used crankset. Don’t know if it was because l was tired and calorie
-deficient, or just frustrated at having to repair cranks all day — either way it took me way too long to install the cranks, and in the process l damaged a crucial (plastic and proprietary part) so my cranks continued to be an issue for several days. But just before dark, l was rolling again, and my patient compatriots and l headed rather enthusiastically towards the steep, long, paved hill between us and the trail.

By a great stroke of luck, @markreimer’s friend @lylewiens happened to be driving through the area hoping to rendezvous with us, and kindly ferried us up the hill, so we spent the night back on track, and around the fire with another new friend. Who rode with us for a bit when we set out the next morning. Thanks to my mechanical troubles and our lackadaisical pace, we figured we were hopelessly behind the bulk of team instagram.

As it turned out, inspired by picturesque surroundings @ultraromance and the crew had spent a layover day taking pictures and hanging out hoping to meet up with us. The ploy worked, and the group, some 20 strong, reunited and spent the rest of the trip more or less together. Gelling quickly into a surprisingly cohesive unit.

Finding a balance between different riding speeds and travel styles — and basking in the company of fellow bike people. It helped of course that the northern rockies are incredibly beautiful, and we were traversing them at peak wildflower season. Not to mention that the Great divide is an amazing trail — always spectacular — generally well routed/ rideable by all sorts of bikes and requiring just enough skill to be consistently fun. 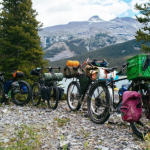 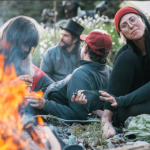 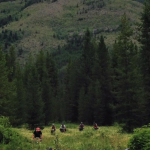 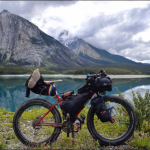 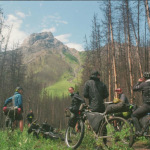 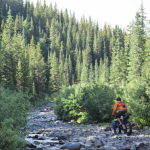 In any case the allotted time passed all too quickly, and before we knew it, the ACA celebration was on in Missoula. So we rushed a little bit, and made it there in time to discover that most of the events were sold out. However, the town was even more full than usual with bike riders of all sorts. So we spent a pleasant couple days with friends old and new, before parting ways. As real friends, as well as instagram followers.

No question, the best internet-date I’ve been on.

Hot on the heels of my foray into the world of the insta-famous and group-touring (dfl the divide) I was invited to a sort-of-exclusive bike party/tour on a new route called the Baja Divide; In celebration of the completion of the route. A pair of adventure-bike-world luminaries and acquaintances of mine; (Nick Carman (@nicholascarman), and Lael…

When my friend Melinda asked me to take her bike-packing, and suggested Patagonia, one of my favorite parts of the world, l immediately said yes. And suggested the Carretera Austral. Which is the southernmost extension of Chilean highway 7. It is largely gravel, and dead-ends into a lake — meaning that the further south you…

It’s the day I’d been waiting for — my ScapeGoat had arrived. Sure I’d been riding the (awesome) prototype Darrin made for me for a couple of years now. But theres nothing like opening the box. Especially after all the back and forth with Taiwan; design and redesign, drawing after drawing. And now l have…

Taiwan seemed so ‘close’ to austrailia that it just made sense to head there with Matt after our business tour. So we flew to sydney for a bit – and couch surfed his moms house while gearing up for a little surf tour up the coast towards byron, and meeting up with two new friends…