Annapurna the wrong way round

Leery of traveling alone among the highest mountains in the world, l had, once committed to going, invited my friend Matt to join me for some bike touring adventures. An Australian by birth and citizen-of the world by avocation, he is a coastal creature (passionate about surfing, and the water in general) but figured he could handle two months away from the ocean , especially if most of that was spent in Nepal, a condition to which l readily agreed. It’s hard to find someone with a similar travel style/willing to put up with mine.  Matt and l have traveled together before, fat-biking the coast of Baja California, so despite being less enthusiastic  than l about dragging his bike over mountains,  he knew  exactly what sort of absurdity we would be getting into.

We met up in New Delhi, and, a bit pressed for time (Matt had the foresight to buy a return ticket from Kathmandu) opted to head straight for Nepal, riding pavement(!) through the heat and humanity of India.  Cruising through Royal Bardia National Park in the lowland jungle part of Nepal we were prohibited from camping by the military, lest we be eaten by tigers.  For better or worse we didn’t see any tigers or other charismatic mega-fauna said to reside there (elephants, rhinos, freshwater dolphins, etc).  Desperate to escape the heat and humidity we put in several long days on the highway and wound up in Pokhara: tourist mecca and staging ground for the Annapurna circuit.

Billed as the most popular trek in the world, the trail circles the spectacular Annapurna Mountains, with only one high pass to cross. The vast majority of visitors traverse the circuit in a counter-clockwise direction, taking advantage of the gentler grade for acclimatization and 600 m less elevation-gain on the big day over Thorung La pass  5,416 meters (17,769 ft).  For one reason or another, logistics partially, we decided to go against the flow.  Do the trip backwards as it were.

Leaving Pokhara we elected to avoid as much of the main road as possible, choosing to follow a side road to Sarangkot, which turned out to be the launch pad for all the paragliders one sees circling about high above the lake most every day, situated as it was on a mountain top overlooking the city.  The unexpected grueling climb was however a good indicator of things to come.  Midway into the following day we reached the rural metropolis of Beni, the purported end of the road. Where the road quite clearly didn’t end.  Indeed the trail we expected to be a trekker super highway along the lines of Torres del Paine in Chile was in fact a busy road.  Despite being extremely steep and rough it was clogged with buses and trucks, and especially motorcycles.

It turns out that in the last five years, a road had been completed all the way to Muktinath at the base of Thorung La pass, and become an extremely popular motorcycle tourist route.  Though traffic thinned as we ascended, numbers attenuated by the constant rocks, deep mud, and river crossings, a surprising number of Nepalese on street bikes and foreigners on Royal Enfields – neither machine well equipped for the rigors of the journey – made it all the way to Muktinath  3,710 meters (12,172 feet).  So we shared the road with a unfortunately large amount of traffic while we struggled up hill, gaining 3000 m over the next couple of days. Arriving exhausted at the base of the pass, we took a much needed rest/ acclimatization day.

And awoke the day of our planned departure/pass-crossing to snow.  More like heavy nasty slush, which turned the mud track slick as snot, and soaked any one foolhardy enough venture outside, especially if they were clad in the extremely cheap knock-off foul weather gear prevalent in Nepal.  We made the (quite wise in retrospect) decision to ‘acclimatize’ and spend another day indoors eating apple pie and drinking caffeinated beverages.  Tragically a large number of people decided to hike despite heavy snow and white-out conditions.  At last count 24 had died and 60 some are still missing.

The next day broke clear and sunny, rendering the newly snow-covered peaks even more spectacular, and turning all the newly deposited slush to ice. We made a halfhearted attempt to scale the pass, and called it off almost immediately.  The ice would have been hard enough to hike on without bikes.  With bikes, not to mention all our gear, it just wasn’t going to happen.  So we turned tail and headed down through the snow and slush and mud and crashed motorcycles (low-speed no-injury mud washouts as far as we could tell) all the way to Tatopani, a lovely little tourist town perched on the side of a hill in a narrow canyon, graced with hot springs in which we spent most of the evening (and a lot of the following day).

Along the way l lost my beloved top hat, which has been with me for nigh upon 10 years, traveling the length and breadth of the Americas, and been my constant companion.  I spent several hours searching for it (arriving in town long after dark) but evidently its time had come and it had either vanished aided by the fierce wind and the river or a wonderfully battered and befeatherd top hat now adorns the wizened head of some Nepali mountain man.  It’s hard to say goodbye. Hard to turn back. And wonderful to be alive in this beautiful place and traveling in good company. 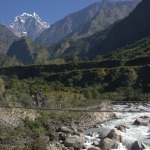 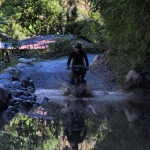 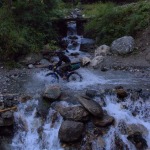 Hot on the heels of my foray into the world of the insta-famous and group-touring (dfl the divide) I was invited to a sort-of-exclusive bike party/tour on a new route called the Baja Divide; In celebration of the completion of the route. A pair of adventure-bike-world luminaries and acquaintances of mine; (Nick Carman (@nicholascarman), and Lael…

When my friend Melinda asked me to take her bike-packing, and suggested Patagonia, one of my favorite parts of the world, l immediately said yes. And suggested the Carretera Austral. Which is the southernmost extension of Chilean highway 7. It is largely gravel, and dead-ends into a lake — meaning that the further south you…

It’s the day I’d been waiting for — my ScapeGoat had arrived. Sure I’d been riding the (awesome) prototype Darrin made for me for a couple of years now. But theres nothing like opening the box. Especially after all the back and forth with Taiwan; design and redesign, drawing after drawing. And now l have…

Taiwan seemed so ‘close’ to austrailia that it just made sense to head there with Matt after our business tour. So we flew to sydney for a bit – and couch surfed his moms house while gearing up for a little surf tour up the coast towards byron, and meeting up with two new friends…