The road signs all over India l find quite amusing, but Nagaland takes it to a new level — not content to advocate save driving practices, they want to tell you how to live a good life too.  I only have photos of ones l liked, which means the really paternalistic or sappy messages are missing — there is no way l could capture all of them anyway: on the road from Kohima (the capital) headed west, there is a new sign every 500m or so. And one fo the villages along the way added their own signs with famous quotations — everyone from Ayn Rand to Karl Marx and everything you could think of inbetween.  If youre going to have billboards its a good way to go l guess…

in the hills again

a brief sojourn in Nagaland

My some-time traveling companion Matt loves the ocean, lives for it in a way. And can’t bear to be away from it’s presence for too long.  But its’s the mountains which call to me. Too long in the flat lands and l start to get restless, grumpy — especially when bike touring. So grinding through hot, flat Assam l was continually teased by the hazy contours of the highlands to the north. The eastern extension of the Himalaya/Tibetan plateau in Anarchal Pradesh. A state which, due to its proximity to the contested border with China, was for all intents and purposes closed to me. It is possible to get a permit to travel there — but you’re expected to have a guide, and an itinerary, and a group. Some one more adept at hoop-jumping and subterfuge, could no doubt have arranged the paperwork — but l, who, find even the day to day bureaucracy of presenting my passport while checking in at hotels trying, didn’t even make an attempt.
Locked out of the Himalaya ( actually think its a different mountain range — but obviously the work of the same massive tectonic uplift) by meaningless power struggles over imaginary lines — l did the next best thing, and pushed east toward the hill country of Nagaland. It’s hard to describe how happy l was to find my self climbing again (and steeply!) after a month or so in the flatlands. The Hills began literally at the state line, and with them a new ecosystem, and culture. So l spent the next couple of days winding my way upwards, through a strange sort of mixed forest, palm and bamboo, and pine and rhododendron, with a few cactus thrown in. Arriving in a world where all towns and roads perched on misty ridge tops — taking advantage of the only semblance of flat ground. 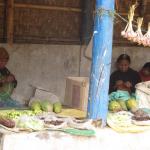